This was the fourth Kickstarter from Fungeons and Fandoms, aka Fynn, aka the proprietor of The Grumpy Unicorn. They’re based in Melbourne Australia, and they create all kinds of geeky and fannish pins, stickers and other merch. This was their thirteenth Kickstarter so the smooth running of this campaign isn’t a surprise, because they clearly know what they’re doing.

The Spinny20 is probably not technically “dice”, but I’m reviewing it anyway – because I was enchanted!

The Spinny20 campaign was to crowdfund a set of six “Spinny20s”, enamel pins with a spinner piece to generate random numbers from 1 to 20. The campaign was low on fluff and high on simple straightforward rewards; stretch goals involved unlocking extra pin designs and colourways, and all of them were unlocked by the end of the campaign. 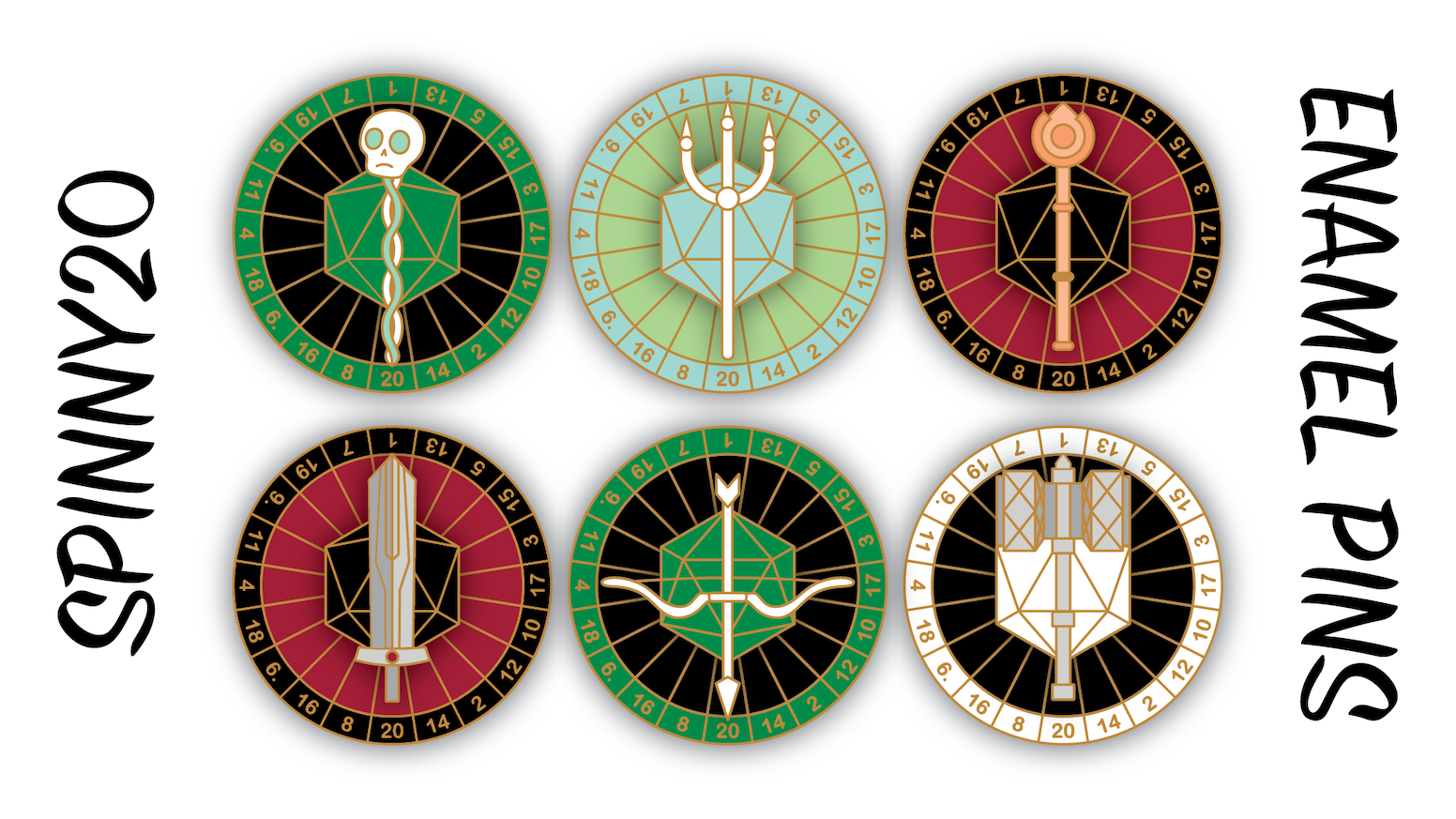 (Not my image; this is from the Spinny20 Kickstarter campaign page.)

I only backed for a single pin as I felt they were a fun novelty rather than something I craved, and the price was fair but not cheap.

My package arrived this week; the packaging was sufficient (a bubble envelope inside a cardboard mailer) but not overpackaged. No branding on any of the packaging, but it was clean, tidy and undamaged which is all one can ask for.

The bubble mailer contained my pledge reward and a nice bonus – a free gift! Unexpected, but most welcome.

The Spinny20 is a hard enamel pin about 4cm across (that’s about 1.5” for those of you in Liberia, Myanmar and the USA). The centre features a spinner, held in place with a metal pin, which spins freely to point at one of the numbers marked around the pin’s circumference.

I chose the Sword pin (aka the “Stabby Stab”) in the Grey Sword colourway, which is what you see here.

And here’s my free gift – one of The Grumpy Unicorn’s “Glass Classes” D&D pin range (the Sorcerer). The note on the card’s back says “this free gift is not graded”, implying that it may be one of their B-grade items, but if that’s the case that speaks incredibly well of their QA standards as I can see no imperfections and it’s very well made.

The Spinny20 pin is solid in the hand without being excessively heavy. If you wore it as a brooch it might pull light garments out of line, but on a heavy lapel or a scarf, for instance, it’d be fine. It’s secured by three pinposts on the back with silicon pinbacks, so it would be balanced well for wearing.

It feels good quality and is not flimsy. With heavy use I might be concerned about the anchoring of the spinner getting damaged, but I don’t think it’s likely to be an issue for most people.

The spin itself is – inevitably – somewhat dependent on technique, and it took me a little work to get a good free spin happening, but it can be done with practice. It could be manipulated more easily than a die roll, but if you have players bent on cheating you probably already watch what they do.

The free gift Sorcerer pin is of similar quality; it’s about 3.5cm high and 2cm across, with two pinposts and silicone pinbacks. It would be very secure when worn as it’s much lighter than the Spinny20 pin, being smaller and without the spinner piece.

The Long and the Short of It

Originally I had thought this would just be a cute novelty, but I can definitely see the use when you don’t have room to roll dice, for instance, or you aren’t carrying dice with you. It’s a lot more satisfyingly tactile than a dice roller app! You wouldn’t want to use it all the time – and you’re out of luck if you’re rolling anything other than a D20 – but it’s surprisingly functional as well as fun!

They’d also definitely make fun gifts for the gamers in your life, and I’m wishing I’d backed for a few extras on those grounds alone.

Overall it’s just a very attractive and decorative object, and I’m definitely going to be watching for their next Kickstarter and checking out the Grumpy Unicorn online store in the meantime.